04 – 06 September, DUNC held a 3-day partner meeting on the Swedish Island of Öland. Joining us for the first time were our new German partners, the Tourist Boards of Stralsund and Wismar and a number of DUNC’s associated partners including representatives from the National Park Kurshskaya Kosa, RU.  The meeting focused on touristic product development with an emphasis on quality and sustainability. Each site was enthusiastic to present their suggestions for touristic offers that benefit not only the individual UNESCO sites but importantly also have cross-border and regional value. The team addressed seasonality and had positive and constructive discussions about how we can help extend the main tourism season. The feasibility of off-season offers such as Equinox and local food related events/festivals was investigated, as was the potential of new technologies such as augmented reality (AR), virtual reality (VR) and holograms etc. and how interactive content can complement our region’s natural & cultural sites. We will now move on with some of the products and services that were discussed with pilot studies being planned at our partner UNESCO sites.
The whole conference was hosted by the Municipality of Mörbylanga and held in Kastlösa within the WORLD Heritage UNESCO site, the Agricultural Landscape of Southern Öland. Everyone enjoyed the excursion to the island’s alvar plains & coastal lands, where Öland farmers preserve and shape the landscape’s future.

The conference and our DUNC work attracted the attention of the local Swedish press who published two newspaper articles – found under barometern.se and olandsbladet.se (Swedish) 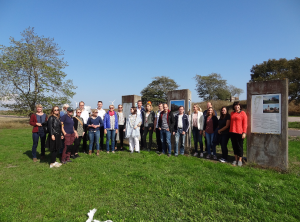