During the first two weeks of October the DUNC exhibition South Baltic Sea World Heritage Sites was available at the Naval Museum in Karlskrona. Participating World Heritage Sites were the Naval Port of Karlskrona, the Agricultural Landscape of southern Öland, the Curonian Spit and the Hanseatic Cities of Wismar and Stralsund. The goal was for visitors to be inspired and curious about these beautiful sites by learning more about them. The winning photos of DUNC’s previous photo competition were also accessible through a QR-code.

In total the exhibition had around 5’000 visitors and it was a cooperation between the DUNC Project and the Naval Museum in Karlskrona. The same exhibition was also shown at Naturum in Öland. 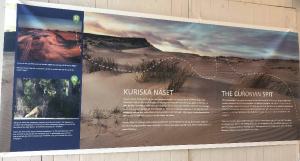